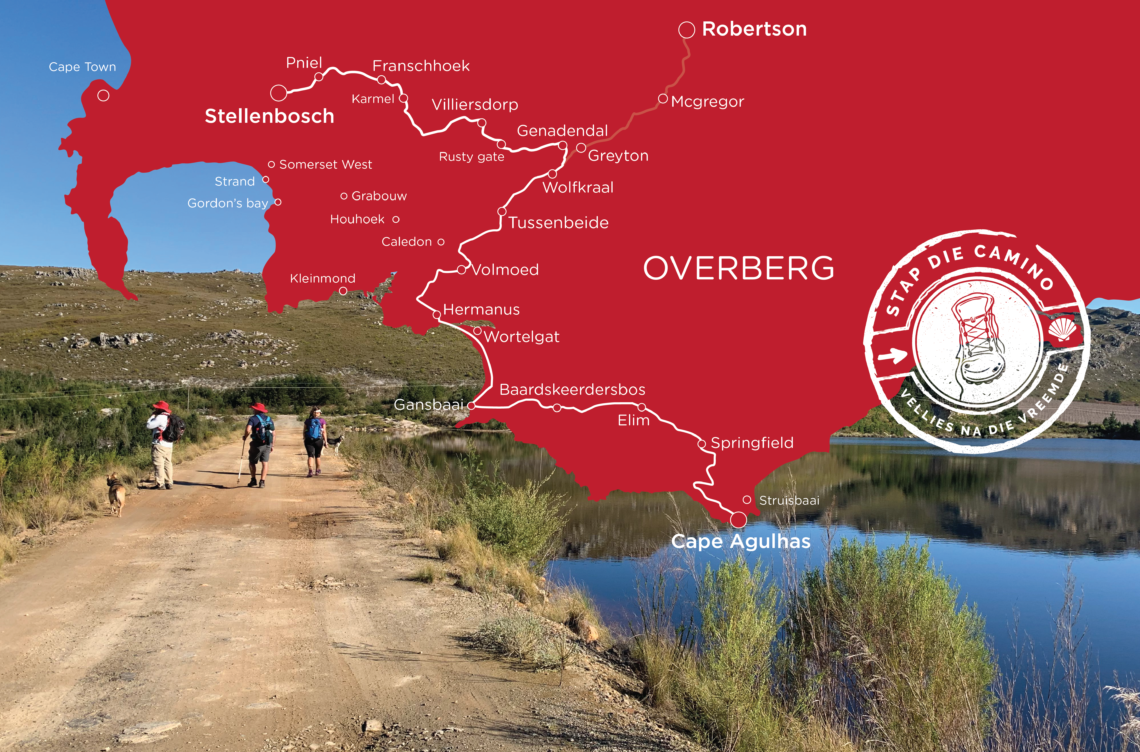 The Pilgrimage to the most Southern Tip of Africa: the LightHouse at Cape Agulhas

The total distance from Stellenbosch to Cape Agulhas is 317 km and from Robertson to Agulhas is 277 km. There are shorter route options to start in Villiersdorp (254 km) or in Volmoed (151 km).

In 2014, Frederick Marias and a few volunteers embarked on the first pilgrimage from Robertson through the Overberg to Agulhas at Africa’s southern tip. With the support of Communitas Stellenbosch, who also acts as the patron for the project, the route has been introduced as The Pilgrimage of Hope.

The oldest history of the Christian faith in South Africa can be found in the Boland and Overberg region. In a way, this history encapsulates this country's interesting story. It speaks of the bitter conflict but also close contact between Westerners and Africans.

The Pilgrimage of Hope routes start either in Stellenbosch or in Robertson and tell stories of pioneer farmers and their slaves, of prisoners of war building roads, and of the region's first inhabitants living in caves along the coast.

Long before the convenience of modern technology, people settled here to build a new future based on their unwavering faith. The names of various places in this region bear testimony to the religious underpinning of its past – names such as Genadendal (Valley of Grace), the Hemel-en-Aarde Valley (Heaven and Earth Valley), Babilonstoringberge (Tower of Babel Mountains) and Elim.

Poignant stories of people's faith can be found along the way. Pilgrims reflecting on their own journeys will resonate with many of these stories. There are accounts of tragedies and failures and also of amazing endurance – like Bernard and Joan's quiet struggle against apartheid at the retreat centre with the meaningful name Volmoed (filled with courage) in the Hemel-en-Aarde Valley near Hermanus.

At Robertson, one of the two starting points of the Pilgrimage of Hope, there is the story of the first reverend of Robertson, Rev CH de Smit, who died of fever together with other members of the congregation shortly after establishing the congregation. Stellenbosch, the other starting point of the route, is the second oldest town in South Africa. At Genadendal, Elim and Pniel, moving stories are told about slavery and the emancipation of slaves in South Africa. At Die Galg (the gallows) between McGregor and Greyton, pilgrims encounter the story of the unfinished road and of the Italian prisoner of war who hanged himself in desperation, most probably after the war had ended.

At Boontjieskraal there is the tragic story of the De Wet family and the so-called curse put on them. The graveyard of the farm bears silent witness to this. Gansbaai has a myriad of stories from the fishing community, and the people from Baardskeerdersbos have various accounts about the name of their village. The people from Brandfontein will tell you about the lantern waivers who used their lanterns to lure ships, hoping they would run aground. The Pilgrimage of Hope has specifically been designed to take pilgrims past churches and other places of spiritual and cultural significance, allowing us to be inspired by the stories
of these faith communities, to learn from their mistakes and to find hope for the future.

This pilgrimage, which has the southernmost tip of Africa at Agulhas as its final destination, can also be called a journey of hope and serve as a prayer for our continent. Pilgrims are asked to pray Nkosi Sikelel' iAfrika (God bless Africa) upon reaching the southern tip of Africa, committing themselves to bring hope for Africa.

The Pilgrimage of Hope is also a tribute to Prof Russel Botman who passed away on 27 June 2014, the year in which the first pilgrims walked the Pilgrimage of Hope. The week of the first pilgrimage coincided with his birthday on 18 October. During his term as rector and vice-chancellor of Stellenbosch University, Prof Botman introduced the HOPE Project. The overarching purpose of the HOPE Project is to find sustainable solutions for some of South Africa and Africa's most pressing challenges.

The path mainly follows backroads (dirt roads) with little traffic and has been designed to make use of public and private farm roads and at times even follows historical oxwagen roads and footpaths. The route also goes through two nature reserves and pilgrims need to get permits to enter before arriving. A small percentage of the route follows tarred roads. Here, pilgrims must take care and ensure that they walk on the shoulder of the road. It is recommended that pilgrims wear red pilgrim's hats to increase their visibility.

Sections of the route are signposted. However, we trust that it will be signposted all the way in the future. Signposts include signs with a lighthouse and arrow or red arrows painted on rocks or lampposts.

Route B: Start in Robertson

Although some pilgrims have done this pilgrimage solo and reported that they never felt unsafe, we advise that you rather do this pilgrimage in groups. We have set departure dates for groups of up to 8 pilgrims at a time: From September 2020 through to May 2021. If you have a few friends and prefer to make up your own group, you can choose any dates and any distance, and leave the rest of the logistics to us!

Included in our package: